You are here: Home / New Long Form Blog / blog posts / NOTES FROM OUR COVID-19 FUTURE IN AUSTRALIA – What Might Tourism...

In Australia we are now at the stage of the pandemic/epidemic where people are starting to think through the next stage. If we can keep numbers relatively low in the next few weeks, then the pressures will grow about relaxing the current restrictions. The result will be a combination of:

There are three basic scenarios that we can use to think about what happens to tourism: 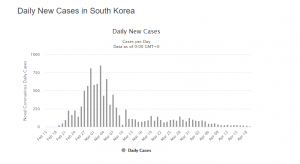 3/ A Wilder Ride. This one looks a little like the model for a rolling epidemic that the Imperial College in London looked at: 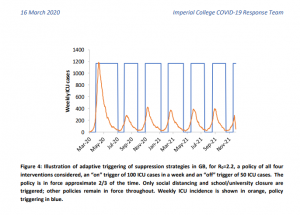 The Key Drivers Inside the Scenarios 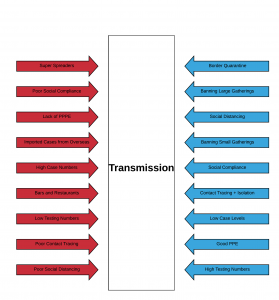 As stated by the Prime Minister in Australia on April 16th, the government strategy has been to reduce virus transmission for long enough to prepare our systems for a relaxation of restrictions. The key components of this preparation are:

In terms of restrictions, given that many cases have come from overseas travellers and that there have been demonstrated cases globally of super-spreader events and clusters in bars and medical facilities it is highly likely that a relaxation of restrictions will still include:

This leaves the social compliance factors which may be problematic. Government restrictions and punishments for misbehaviour can only work for short periods unless there is significant cooperation from the majority of the community. Given that the wave of cases experienced in Italy, Spain, the United Kingdom and the USA has not arrived in Australia the motivations of people to keep responding to social distancing requests and instructions may wane quite quickly. The level of compliance may be increased by good communication, or more worryingly by a second wave of cases.

One exception to this will be older people. A force field analysis of what drives up mortalities looks like this: 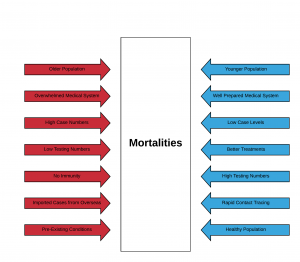 If we avoid really high case numbers overwhelming the medical system and have relatively high border controls, then the main risk for high mortality numbers is exposure of older people. This graph from South Korea puts this is stark relief: 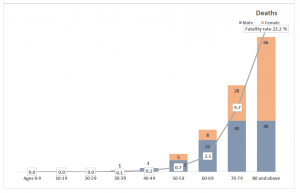 South Korea has responded well to their to the outbreak. Their hospital systems have not been overwhelmed, and they and a modern health system. All of this combined means that their mortality figures are a best-case scenario. The high levels of mortality that are occurring in older people will have an effect on the willingness of older people to move about, and how they move about.

A subsection of the younger age groups, especially those with pre-existing conditions, will also have lower levels of mobility.

If we combine this all together, then I think that the overall picture is one of:

So What About Tourism?

There are two key issues to look at here, the first is the economic nature of the tourism industry, the second is the likely behaviour of people.

The Economic Value of Tourism

This leads to several conclusions:

If we think about the effects of the COVID-19 outbreak on domestic and international travel, then we can break it down into three key areas:

In this scenario, we eliminate the virus in Australia and New Zealand and agree on complete border controls. This means no people coming into Australia and New Zealand for say 12-18 months except those travelling between Australia and New Zealand. This is because if you have no virus circulating in your country, then a test and quarantine system is almost certain to allow small numbers of infected people in. If you have no virus circulating in your country plus hardly any immunity in your population, then letting a few people in that are infected could start of a second wave epidemic. An alternative is to allow people in that have two positive antibody tests in a row 14 days apart. However, there are still questions about whether all people with antibodies are not infected. Any test and quarantine system is a public health response, not a hard and fast barrier.

In this scenario, domestic tourism could do quite well. People will be able to move around freely inside Australia and between Australian and New Zealand without being worried about the risk of contracting the virus. They would also be confident about booking holidays in advance. This means that people will be more likely to travel over longer distances and via planes. Ski fields will be able to open fully with share accommodation. People will not be scared about going out to bars and cafes. Money that would otherwise have been spent on international trips would be spent domestically. After long periods of restrictions, people would be very keen to get out and about.

Australia has been very successful so far at containing COVID-19 as can be seen in the following graph (from: https://www.worldometers.info/coronavirus/country/australia/) : 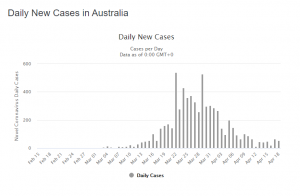 At April 18th, 2020 the confirmed case numbers were 6,586. Given that the number of new cases has been falling, that the majority of cases have been from returning travellers, and community transmission has been low, this figure is probably reasonably accurate. With this success comes a new challenge. Even if we assume that there are really four times the number of cases that is only 0.1% of the total population. That means 99.9% of the population still has no immunity. In epidemiological terms, that means that the situation on immunity is no different than six months ago. The population is basically 100% susceptible. What has changed is that we have many more sources of possible infection, both domestically and internationally. That makes us very vulnerable to the situation of a second wave epidemic if community transmission starts up again.

I think that this is unlikely. The government strategy has been to knock down the community transmission to give us breathing space to prepare for the next phase. That next phase appears to be driven around three factors:

In turn, my view is that the thinking of governments will be driven by their recent experience, which is:

Therefore quite strong border controls are likely to be in place for sometime. These are likely to look something like the South Korean controls that were put in place when cases from Europe were rising: 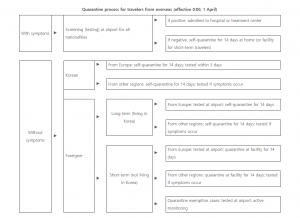 My view is that all travellers will be subject to test and quarantine in specified locations at their own cost.

Even if cases are kept low overall recent experience shows us the likely path forward. During the last ten days there has been a major outbreak in Northern Tasmania centred around two hospitals. The response has been to put 4000-5000 people into quarantine. There has also been an outbreak in an aged care facility in New South Wales. So, what we are likely to see is generally low numbers with flare-ups around the country which are quickly jumped on to stop a second wave starting.

What this means for tourism is :

This leaves us with a picture of more Australians holidaying within Australia than historically. However, I believe that the visits will be of a shorter duration, and closer to home than previously for several reasons:

These factors will favour the states and regions with larger populations with less reliance on international and interstate tourism. So tourist destinations in Victoria will fare better than those in Northern Queensland who will lose both their international visitors and a large portion of interstate visitors.

Older people will be less likely to travel than the general population.

These factors will wane over time if things remain well controlled, and the economic pain is seen to be reducing.

In this scenario, despite strong national border controls a combination of pressure to open up the economy and less social compliance results in a series of larger-scale small outbreaks which results in stronger reinstatement of government restrictions. This dents the general confidence of the community as they realise that the virus cannot be contained as they thought. Increased imposition of shutdowns increase the level of uncertainty about travelling. Longer economic disruption curtails people’s capacity to spend and reduces their confidence in their economic future.

The result is basically the previous scenario with less general travel and even less interstate travel.

Shorter duration trips make up an even larger percentage of all trips.

The effects last longer as people’s confidence is severely dented. Even if government action is able to get case numbers under control people will be very wary.

The situation for tourism is very uncertain and is likely to continue to be so for a fairly long period of time. Business in the sector and organisations that represent and serve the sector need to keep thinking about what might happen to build strategies for the long term. Strategies that enable survival in the short term and maximise domestic tourism in the medium term should be prioritised.

What Might the Next 12-18 Months in Australia Bring?
Scroll to top