Four scenarios for the next six weeks in Victoria (From July 9th, 2020)

Four scenarios for the next six weeks in Victoria (from July 9th, 2020)

I live in Melbourne, Australia.

We have just entered six weeks of restrictions being put back in place for the community in Greater Melbourne (but not most of the regions). Those restrictions are basically to stay at home except to shop for food (including takeaway), exercise in your family group, work if you cannot work from home, and for giving or receiving care.

Moving forward, I think there are four basic scenarios that inform us about what will happen in the next six weeks and their impact on the next 12 months.

We have got to this position because local transmission has rapidly risen in the last couple of weeks to produce this picture:

As I have been saying for a couple of months, we are in a more precarious situation than back in February March because over 99% of the population still has no immunity and we have many more sources of potential infection than we had early in the outbreak.

Here is what I presented and wrote in late May:

I think the most likely scenario is one of ongoing clusters of infection and wider outbreaks as we increase the number and range of interactions between people. This will be exacerbated by complacency in the general population. If cases stay low for a number of weeks, it is my view that this increases the risk in the medium term as it is exhausting for people to maintain hygiene and social distancing measures in the face of a threat that does not seem to be materialising.

There are particular risks in regional areas what have experienced little or no disease to date but may get an influx of visitors as restrictions on travel are reduced.

The government response will be to jump on these outbreaks as quickly as possible through testing and contact tracing and some level of shutdown, depending on the scale of the problem. This becomes harder the more interactions there are between people, but I am confident that we can achieve this and not end up experiencing some of the terrible situations in other countries.

The shutdown responses may include:

Shutdowns of individual businesses, organisations and schools as we have already been experiencing.

Wider shutdowns of areas or building types as we have seen in the closure of nightclubs in South Korea.

Wider regional restriction or even imposition/reimposition of state barriers to movement if things start to get out of hand.

From here, I think there are four basic scenarios, and they have different implications for the next 12 months:

Scenario 1: A significant fall in case numbers in one week

The basis of this scenario is that we have seen rising cases in the community for a while, and some people have already been more cautious in their behaviours.

For example, the ABC has published mobility data that indicates that people were already travelling less in Melbourne, a behaviour that was not reflected in data from Sydney: 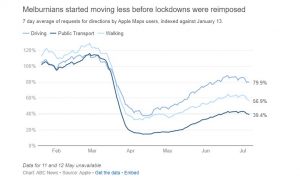 The counterpoint is that we have also seen people rushing out to socialise in the last two nights before the lockdown so many people have been behaving irresponsibly.

While this looks like a good news scenario, it could have terrible implications.

In the short term, it is obviously good. Fewer cases means less sick people, fewer people dying, and a more manageable outbreak to get under control.

The longer-term implications are that a lot of people will say that the more severe restrictions were not necessary, and the government overreacted (cue the Murdoch Press). This will create two problems. Firstly it will undermine public trust in governments and public health officials, which is critical in the current situation. Secondly, it will embolden people to continue to behave irresponsibly because they will see it as vindication that the risks are not as high as they are being told. This is likely to create three results:

Scenario 2: A significant fall in new case numbers over 4-5 weeks which allows restrictions to be removed.

This is the most likely scenario as we have seen rising cases in lots of areas, poor behaviour from a large percentage of the population, and outbreaks in hospitals and aged care facilities. This, coupled with the fact that we are reasonably confident that the restrictions can reduce transmission, should slow things down.

This is a good news scenario. It will reinforce public trust in the responses of government, and we will have a proven model of a response that works.

The only concern is that it might increase complacency because of a successful response, but that is a minor issue.

Overall, we will be back to where we were a few weeks ago, some circulating virus, low levels of immunity and still highly susceptible to another outbreak in the next few months.

Scenario 3: A Slower Fall in case numbers which allow partial reversal of restrictions

The model we have to look at here is the phases of the outbreak in South Korea: 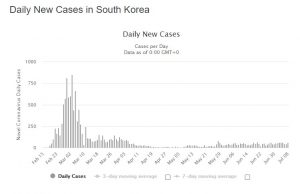 They had an initial outbreak that was highly clustered and was able to get it under control. Then in May, they had a series of cases that has resulted in two months of ongoing daily cases that are not under control. If we zoom in to the last part of the graph, it looks like this:

So this scenario looks like on ongoing bubbling up on new cases that do not quite get away from us but we cannot get under control.

There will be increasing pressure to reduce the high levels of restrictions, even if the first six weeks of lockdown does not produce the desired result.

The government may decide to do that in part.

Given new information that aerosol transmission could be more critical than previously thought, and areas of poor ventilation are more at risk, this may mean things like:

Ongoing high risk of another major flare-up due to higher levels of circulating virus in a population which still has very low levels of immunity.

Most of regional Victoria has been spared through the Pandemic as can be seen in the following map where red is high case numbers and green in low case numbers: 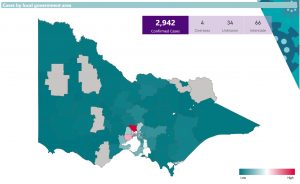 The basis of this scenario is that there have been reports in the last 24 hours of lots of people leaving Melbourne to head into regional communities, and particularly coastal areas before the lockdown commenced. The lockdown rules included an allowance that if you were already on holidays, you only needed to return to Melbourne once your holiday was finished. People seem to have been obeying the letter of the law on this but ignoring the spirit of it by being able to say they were on holidays before the lockdown came into place even if they only left 2 hours before the lockdown started.

This puts the regional communities in question at considerable risk of an outbreaking in the next week if people were infected before they left Melbourne. Due to the likelihood that the people who are heading out of Melbourne in this way are much more likely to flout other rules as well, this increases the likelihood and likely size of an outbreak in a regional community.

Outbreaks in one or more regional areas, especially if located in larger population centres could escalate quite quickly as people in the regions have had little to no exposure to risk up until this point.

If this happens, then we could see restrictions put in place in 10-20 days just as case numbers start to fall in Melbourne.

If this happens, it will heighten the economic damage to communities that have been badly affected by bushfires and the Pandemic so far this year. They are already being damaged through lack of visitors from Melbourne, interstate and overseas. An outbreak in the regions could see that damage extended for at least nine weeks.

For example, the snow season in regional Victoria could be lost entirely (and is already badly damaged for those businesses involved).

We are in a very uncertain place in time. The astute reader will have noticed that I have avoided a fifth scenario which is an uncontrolled outbreak. This is because I think it is a very low likelihood, and because we have plenty of examples from overseas to learn from if this happens.

For simplicity sake, I have also avoided combining a regional outbreak with an ongoing Melbourne medium caseload which could restrict all people from Melbourne and interstate visiting regional Victoria and restrictions on businesses in regional areas on top of that.

My view about what to do is:

Contact us if you want to discuss a presentation for your organisation
The Clusters in Melbourne, Victoria, June 30th 2020 A Bloodbath for CBD Commercial Office Space? July ,2020
Scroll to top