Victoria, Australia, COVID, and the Next Six Months – a Central Scenario

You are here: Home / New Long Form Blog / blog posts / Victoria, Australia, COVID, and the Next Six Months – a Central ...

Victoria, Australia, COVID, and the Next Six Months – a Central Scenario

I have been talking to a business this week that has a critical need to try and understand what its workforce looks like in mid March and beyond. They have had significant work force challenges due to people being absent from work due to having to isolate over the last few weeks as the latest wave has grown in Victoria.

While I do not do forecasts I certainly do scenarios and I do that to talk people though my logic so they can do their own scenarios and make decisions. I have talked them through the following centra scenario plus some of the major things that might change that picture.

In any scenario work it is critical to detail your assumptions because you are telling a story based on those assumptions. If you want to then you can skip the assumptions and scroll down to the scenario story and come back to check on my assumptions as you read. 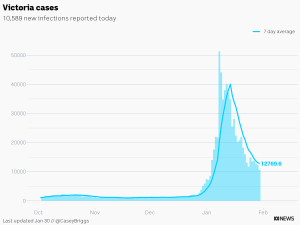 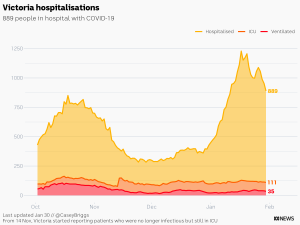 With the caveat that the case numbers have been mucked around due to the testing problems and confusion we have had with some tests being reported many days after they were taken and many people not being able to access tests. Therefore the hospitalisation figures are much more reliable.

However I believe that this overall picture hides two sub populations in Victoria. The first of those is made up of two groups:

The second population is made up of people that are reducing their risk of getting infected. This includes people having to isolate having been close contacts and those reducing the number of people they interact with to reduce risk. Some because they want to get a booster vaccination before they resume a more normal life.

I do not know how big those two respective populations are but the mobility and spending data that we are seeing indicates quite a large group in the second population: There’s no Victorian COVID-19 lockdown, but Melburnians are choosing to stay home anyway

The UK gives us some indicators about waves with Omicron: 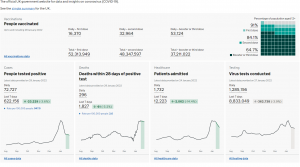 With the caveat that they are in winter, have different restriction settings and have had many more infections before this wave. What the UK data shows is that:

The current Victorian data seems to be on a similar path although the messiness created by testing issues makes that difficult to fully assess.

We will see the schools re-open in the first week of February and this will see children mixing with different groups than they have done over the summer holidays. My view is that this will result in more mixing and spreading as more children get infected and spread that infection back through households. This is also likely to coincide with a significant number of people relaxing their isolation as the current wave falls ( an assumption in itself).

A large number of the Pandemic waves have coincided with winter as people have less options for mixing and socialising outside and ventilation rates fall. This is obviously true of colds and the flu. The Japanese experience shows what a relatively well controlled outbreak can turn into in the middle of winter: 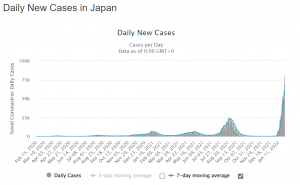 That a combination of restrictions and cooler weather that allowed people to go to prioritise outside events with high masking rates and increased vaccination brough numbers down (7 day ave was 97 on Dec 1) and of course not Omicron.

Then winter caused a new surge as in many countries, especially with Omicron. Now the 7 day average is over 62,000 cases and climbing rapidly with over 82,000 cases reported on Jan 29th.

We are seeing good progress on vaccination in Australia:

My assumption is that we will continue to get good coverage for the third dose although it will be less than the coverage for two doses. Firstly because it can never be higher and secondly because the early group of people that had AZ vaccination are very keen for an mRNA booster but the later groups may be less keen. Especially if this current wave fall steadily from here and a significant number of people believe it is finally over (again).

So – The Central Scenario

So my central scenario (or probable scenario in Foresight Cone terms): 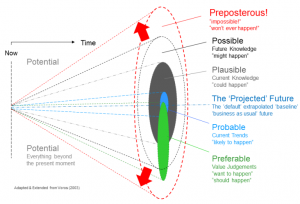 From a workforce planning point of view a lower wave means less absences and I also suspect that governments may be less restrictive in the isolation rules.

Of course there are a number of factors that can push these scenarios into less probable scenarios including:

I want to make it clear that this is just very basic scenario work. There is no modelling that underpins what I have written. I have written it to provide people with a view and all the assumptions so they can think through their own issues.

The scenario described here is intended as provocations for further discussion and thinking. They should not be taken as specific advice. They are stories about a future that has not happened yet.

If you would like to see more of my writing you can subscribe to our bi-monthly newsletter: